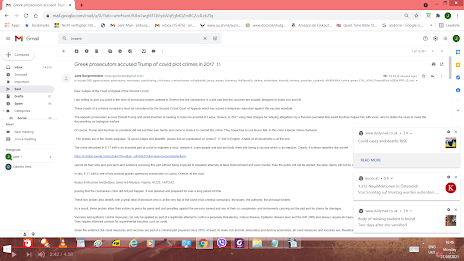 Dear Judges of the Court of Appeal of the Second Circuit,
I am writing to give you proof in the form of prosecutor probes opened in Greece that the coronavirus is a plot and that the vaccines are actually designed to make sick and kill.

These proofs of a criminal conspiracy must be considered by the Second Circuit Court of Appeals which has issued a temporary injunction against the vaccine mandate.

The Appeals prosecutors accuse Donald Trump and Jared Kushner of seeking to have me arrested in Larisa, Greece, in 2017 using fake charges for relaying allegations by a Russian journalist that Jared Kushner helped him with visas, also to obtain the visas to make the documentary on biological warfare.

Of course, Trump and Kushner as president did not soil their own hands and come to Greece to commit this crime. They knew how to use lesser folk, in this case a lawyer Simos Samaras.
The probes are in the Greek language. To assist judges and plaintiffs, please find an explanation of  probe E 17 449 in English. A table of all documents is at the end.
The crime described in E 17 449 is an essential part of a plot to engineer a virus, release it, scare people and lure and bully them into taking a vaccine which is an injection. Clearly, if science reporters like myself

cannot do their jobs and give facts and evidence exposing this plot without being exposed to repeated attempts at false imprisonment and even murder, then the public will not be alerted, the false claims will not be challenged, and the plot will be allowed to advance.

In fact, E 17 449 is one of two criminal probes opened by prosecutors in Larisa, Greece, at the court
Kούμα & Μεγάλου Αλεξάνδρου, Δικαστικό Μέγαρο, Λάρισα, 41222, ΛΑΡΙΣΑΣ
proving that the coronavirus crisis did not just happen. It was planned and prepared for over a long period of time.

These two probes also identify with a great deal of precision who is at the very top of the covid crisis criminal conspiracy, the brains, the authority, the principal funders.

As a result, these probes allow their victims to press for penal and civil penalties against the persons named and any of their co conspirators and instruments carrying out the plot and for claims for damages.

Vaccines and epidemic control measures can only be applied as part of a legitimate attempt to control a genuinely threatening, natural disease. Epidemic disease laws and the IHR 2005 also always require all measures to be minimal, targetted, scientifically proven and appropriate. They require informed consent for experimental vaccines such as covid.

As mentioned, probe E 17 449 names Donald Trump and Jared Kushner as the instigators of a plot to have science reporter me, Jane Burgermeister, falsely imprisoned using criminal means on 16th February 2017 for relaying allegations of a Kremlin based journalist Alexander Zamyslov; while Zamyslov was interviewing JB in Larisa in June 2016, for a documentary on the subject, among others, of a global plot by Billionaires Bill Gates and George Soros to engineer a virus, scare people and lure them to take a vaccine designed to make them sick and kill them, and seeking an FBI report from 2009 on that plot, that Jared Kushner helped him obtain visas.
E 17 449 was opened in 2017 by Appeals prosecutors in Larisa, the second highest court in Greece, underlining the strength of the evidence.

The second probe Delta 15 218 opened in 2015, referred to in E 17 449, names
· Bill Gates
· George Soros
as people with the personal knowledge, motive and means to seek to falsely imprison the same reporter for exposing their role in a plot to spread Ebola deliberately around Africa and the world in 2014 and give people an experimental vaccine, which may give people Ebola when she was in a monastery in Greece, St John the Forerunner in Anatolis.
That these probes are linked, have a common denominator and must be seen together, is also shown by the way E17 449 contains as part of its evidence in the form of email communications with the Russian journalists interviewing JB in Larisa a discussion of D 15 218 as well copies of documents belonging to D 15 218.
The Greek and other governments, could and should, have been prosecuted and convicted these Billionaires under due process in 2015 and 2017 given the evidence in E 17 218 anbd D 15 218. They knew about the plot and could have stopped it altogether.
Instead, they joined in the plot to suppress the evidence against them and allow them to escape justice to advance their persecution of the science reporter Jane Burgermeister and of the plot.
Both probes outline a plan global in scale, affecting every country and person in the world, to
 engineer a virus lethal for human beings
 release it deliberately and spread it using faulty epidemic disease protocols
 scare people using a campaign of false and misleading claims, omission and misrepresentation
 have WHO declare a globel epidemic emergency to set in motion vaccine campaign
 entice, lure people into taking a vaccine designed to make people sick and kill them
under the pretext of an emergency and using an Emergency Use Authorization
1. · using a campaign of deception, false claims and omission
2. · with the objective of giving the injection to to virtually all the people in the world
It may be argued that we have evidence of a plan, a plot in E 17 449 and D 15 218.
But was it ever executed? Covid, the virus and vaccines may not be a part of that plot.
Facts show that the persons named in the probes, Trump, Gates and Soros, participated, and ordered their subordinates and instruments to participate, in actual fact and carry out the scheme described in the probes E 17 449 and D 15 218 to carry out that plot, and that the covid vaccine campaign is the execution phase of that same plot.
One key fact is the origin of the covid crisis in January 2020 is a lab engineered virus.
In 2014, Anthony Fauci at the NIAID launched a covert programme to fund gain of function research, research designed to make covid more deadly to human beings, including research in Wuhan, China, the very place covid originated.

Knowing that such research was banned in October 2014 for 3 years, Fauci used a front organization EcoHelath Alliance, funded also by Bill Gates, to channel more than 3 million dollars to research focussing on making a spike protein in the covid more dangerous to people. In 2017, after Trump assumed office and the ban was ended, the Pentagon under James Mattis, and his successors Patrick Shannon, Mark Esper, gave 30 millions dollars to this secret programme to weaponize covid centered on Wuhan.

There have been thousands of reports about this in the English speaking press alone and Fauci has been referred to the Department of Justice for lying to Congress about the research.

The virus was almost certainly deliberately released from Wuhan BSL4 lab. The safeguards in a BSL4 lab make an accidental release impossible.
A second key fact is that the covid vaccine which was planned to be given to most of the 7 billion people in the world as it cost only about 20 dollars and did not require to be stored at very low temperatures, AstraZeneca s, is designed to sterilize.

We have the public statement of Oxford Professor and Gavi member John Bell to Jon Snow on Channel4 TV that the AstraZeneca covid vaccine, is designed to sterilize entire populations, which he made in August 2020, which is a part of Delta 15 218.
His comments from timepoint 8 15 in the Channel4 interview on 24th August 2020 can be seen at the link below.
https://www.channel4.com/news/im-hopeful-were-going-to-start-to-get-readout-early-in-autumn-as-to-whether-this-thing-works-or-not-prof-sir-john-bell-on-oxford-vaccine
This statement alone shows that the covid vaccine campaign is the most horrible and extensive mass poisoning and sterilization operation in history.
That Bill Gates funded a vaccine to sterilize virtually the entire globe is proven by the statement of Sir John Bell, a professor of medicine at Oxford University, who developed AstraZeneca's coronavirus vaccine, made on TV that the aim of the AstraZeneca coronavirus vaccine is proven.
A third key fact concerns the adverse events.
The US government database OpenVaers shows there have been about 60% more reports of deaths following covid vaccines as of September 3, 2021, at 14, 506, than in all the previous 30 years for all the other vaccines (about 30) on OpenVaers, a government database.
There have been more reports of deaths after the Pfizer vaccine than from all the other vaccines in the previous 30 years on OpenVaers.
OpenVaers records only about 1% of all actual events according to a Harvard study which it cites on its own website. So, OpenVaers supplies us with the method we should use to calculate actual deaths.
If we use that method, we come to a staggering 1,450,000 deaths from the covid vaccines as of September 3rd 2021.
Yet, the CDC, FDA have given Pfizer full approval citing positive data.
In short, there are many facts confirming the global covid crisis is the plot documented in E 17 449 and D 15 218.
Greek prosecutors have been acting in concert with each other and with others, unlawfully, willfully, and knowingly to commit crimes to suppress the evidence of a plot to engineer a virus, release it to cause an epidemic and use a vaccine to poison people, collected by public prosecutors at Larisa court in E17449 and D15218 , and which involved as an essential part or supplement crimes against a science reporter giving facts, documents, analysis exposing the false claims, deceitful marketing, which are a necessary part of the vaccine plot.  and they are, accordingly individually responsible for their own acts and for all acts performed by them which has advanced the covid plot.

They have unlawfully, willfully, and knowingly encouraged, aided, abetted, and participated in the plot paving the way for atrocities and offenses  and so are individually responsible for the damage done to Greece, but also to the rest of the world, including the violation of human rights, the destruction of the economy, through lockdowns, the misuse of masks and tests to impose medical martial law and illegal fines and finally, the use of the covid vaccines as a means to inject a poison into people causing them sickness, death, tortures, pains and other harms, persecution of people warning about this plot and the harms.

Any judge or prosecutor who ignores this evidence of a conspiracy exposes themselves to charges of being an instrument of Trump and others and to civil and criminal penalties.
Thank you for your attention,
Jane Burgermeister,
Larisa, Greece
Twitter
janeburgermeis2@

Table of documents in 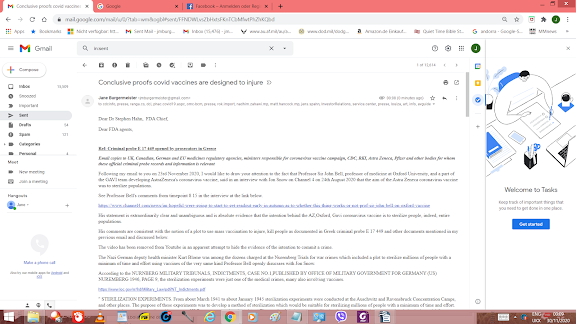 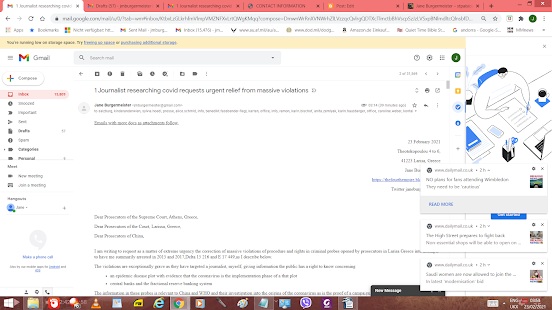