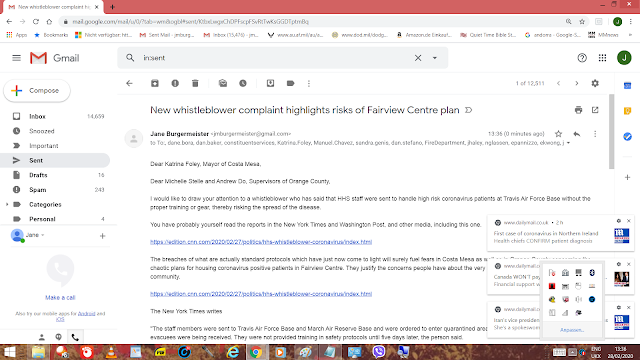 I would like to draw your attention to a whistleblower who has said that HHS staff were sent to handle high risk coronavirus patients at Travis Air Force Base without the proper training or gear, thereby risking the spread of the disease.
You have probably yourself read the reports in the New York Times and Washington Post, and other media, including this one.
https://edition.cnn.com/2020/02/27/politics/hhs-whistleblower-coronavirus/index.html
The breaches of what are actually standard protocols which have just now come to light will surely fuel fears in Costa Mesa as well as in Orange County concerning the chaotic plans for housing coronavirus positive patients in Fairview Centre. They justify the concerns people have about the very real risk of the disease spreading into the community.
https://edition.cnn.com/2020/02/27/politics/hhs-whistleblower-coronavirus/index.html
The New York Times writes
"The staff members were sent to Travis Air Force Base and March Air Reserve Base and were ordered to enter quarantined areas, including a hangar where coronavirus evacuees were being received. They were not provided training in safety protocols until five days later, the person said.
Without proper training or equipment, some of the exposed staff members moved freely around and off the bases, with at least one person staying in a nearby hotel and leaving California on a commercial flight. Many were unaware of the need to test their temperature three times a day. -New York Times
https://www.zerohedge.com/health/hhs-whistleblower-claims-corrupt-cover-dangerous-coronavirus-quarantines
According to whistleblower, staff were not given proper training or gear in at least two military bases in California.
This suggests we are dealing with a systematic failure of management rather than a particular lapse at one base.


Given such evidence of a system failure, it is appropriate to question whether any HHS or other staff assigned to Fairview Centre will be given the right training or gear either?

A new coronavirus case hospitalized in Vacaville seems almost certainly to be linked to the spread of the disease from Travis Air Force base, which is only 8 miles away.

Such a close physical proximity, (just over 8 miles to the hospital itself), could, of course, be a coincidence and proof of widespread undetected cases as some media claim.

But the very close physical and temporal proximity (who knows if the victim lived in or beside the base itself?), makes it much more likely that the new infection was caused by contact with HHS staff or military personnel at the Travis Air Force base who had been exposed to the coronavirus through protocol flaws, moved about freely on the base and in the local community, going to their hotels, presumably to shops etc.

Since this has only now come to light, who in the local community could have guessed the need for extra protection?

Especially troubling is that the whistleblower was threatend with being fired for bringing up these breaches in protocols. She is now seeking federal whistleblower protection. She has alleged a cover up.

This cover up suggests that if there were serious problems in Fairview Centre impacting the health of the residents of Costa Mesa, they may not come to light due to bullying.

"In the complaint, the whistle-blower painted a grim portrait of agency staff members who found themselves on the front lines of a frantic federal effort to confront the coronavirus in the United States without any preparation or training, and whose own health concerns were dismissed by senior administration officials as detrimental to staff “morale.” They were “admonished,” the complaint said, and “accused of not being team players,” and had their “mental health and emotional stability questioned.”

Furthermore, HHS director Alex Azar  contradicts the credible claims of the whistleblower, or acts in a way which can only be characterized as evasive.

"To your knowledge, were any of the ACF employees exposed to high-risk evacuees from China?" Gomez asked Azar during a tense exchange.

"They should never have been, without appropriate PPE," Azar responded - referring to 'personal protective equipment' used to protect workers from disease. "If you were anyone in quarantine, to maintain quarantine, that should be the case."

Evasiveness does not promote communication and problem solving, I suggest.

Please consider, if you have not done so already, including this information on the many breaches in basic protocols risking the spread of the disease contained in the whistleblower complaint in your submission to the court concerning the decision on the injunction.

Good luck and thank you again for your attention.

HELP ME DELIVER THE INFORMATION ABOUT THE GLOBALIST DEPOPULATION PLANS THE WORLD NEEDS. CONTRIBUTE TO THIS BLOG